Although Qoovee began active development in 2017, it still started in test mode on May 12, 2016. On this day in Central Asia, in the Bishkek city, the Kazakh-Kyrgyz team of Qoovee organized a business meeting on the topic of export and presented to more than 500 participants of this event a new trading platform designed to connect businesses on the Eurasian continent and the founder of Qoovee Turat Bulembaev said that Qoovee will revive and build The Great Silk Road online, where Qoovee will become a guide for “caravans” going from East to West, from West to East, from South to North and from North to South.

During 2016, the Qoovee team studied the market, held personal meetings with suppliers and wholesalers in Kyrgyzstan, Kazakhstan and Russia, finding out their pain, difficulties and opportunities. In Moscow, at major international exhibitions, the Qoovee management and team got acquainted with suppliers from China, Turkey, Germany, Austria, Italy, India and other countries and found out their needs, where it turned out that the Qoovee concept is relevant not only in the CIS, but also in these countries that wish to trade with the countries of the post-Soviet space.

“At that moment, we discovered and realized that in such a large space as the CIS there is no single trading wholesale B2B platform that would connect suppliers and wholesale buyers and help them conclude deals and thereby develop the foreign trade of these countries. And therefore we also we saw that even more so there is no solution for trading the CIS + World. And we firmly decided to occupy this niche and market, but not stop at the CIS. The CIS for us was only the first stage of scaling … “- shares his memories the founder of Qoovee Turat Bulembaev.

Thus, by the beginning of 2017, Qoovee management had a powerful market analysis, and the team as a whole was able to connect more than 1000 suppliers to the site! Almost all of them were connected through personal live negotiations. And then the platform began to grow organically and through personal recommendations. More and more wholesalers and suppliers came to Qoovee on their own and registered on the platform. And since then, Qoovee has served and serves about 2 million wholesalers and over 32,500 suppliers representing their products from different countries.

In 2019, Qoovee launched its new line of business – logistics. The Qoovee Logistics platform was developed, which connects the players in the freight transportation market: freight forwarders, transport companies and, of course, customers of logistics services who come to trade on the Qoovee.com trading platform

And here is a brief summary of the development of Qoovee for 6 years in numbers:

After 6 years of development, Qoovee has become a global trading platform headquartered in Dubai, UAE. Today, Qoovee connects businesses and develops international trade and logistics between markets such as China, India, Central Asia, Turkey and the Middle East, Europe, etc.

See also the photo history of Qoovee development over the years: 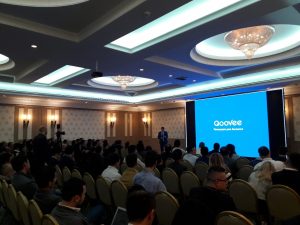